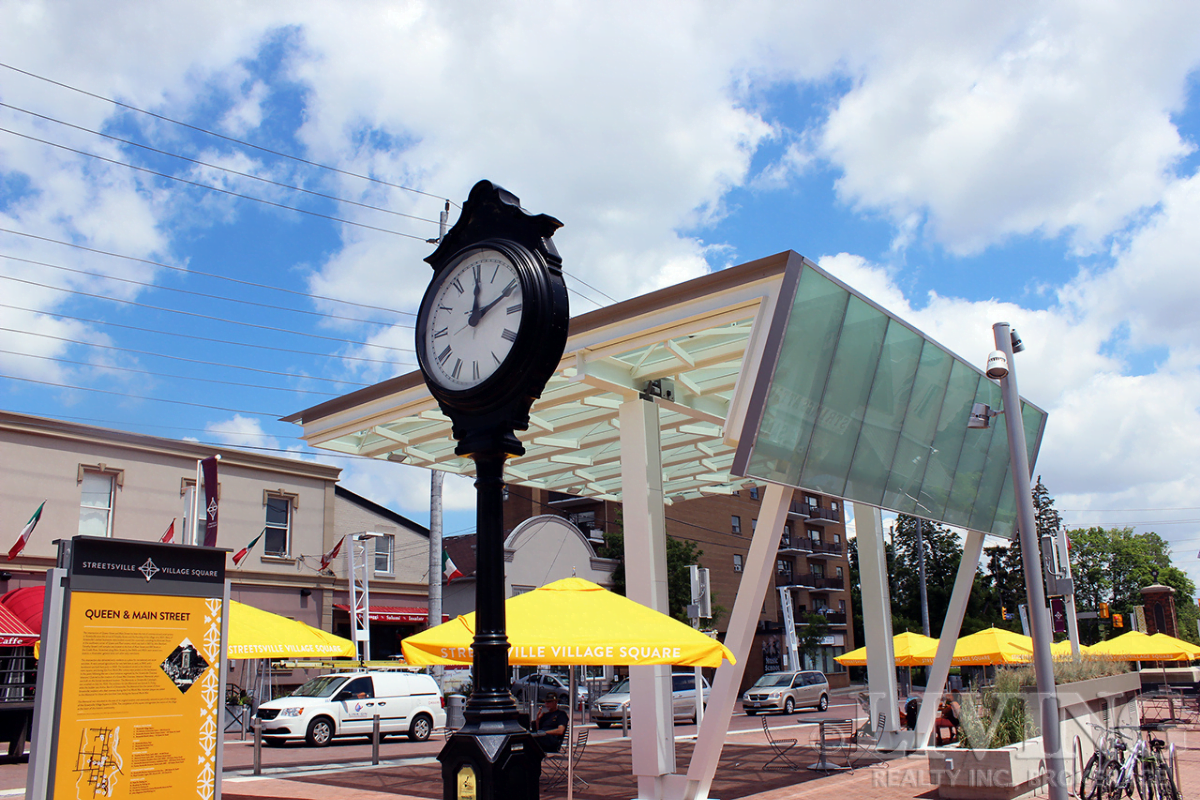 It’s still possible to find that quaint, small-town appeal in the ever-growing city of Mississauga. Dubbed “The Village in the City,” Streetsville is located in the northwestern corner of Mississauga, on the peaceful Credit River. The picturesque neighbourhood is home to the most historic houses in the city and seamlessly fuses old-world charm with a vibrant assortment of unique restaurants, bars, cafes, and shops.

Background
In 1819, Timothy Street financed the survey that would become Streetsville. Streetsville was officially incorporated into a village in 1859, then incorporated into a town in 1862. It was known as a busy manufacturing village with a sawmill and a grist mill that was powered by the Credit River. By the 1900s, Streetsville had become a tight-knit rural community that was driven by small businesses – a notable departure from its mill town roots.

Parks and Green Space
The breezy and sprawling Streetsville Memorial Park (355 Church St.) houses a soccer field, softball diamond, outdoor pool, plus community centre, and nature trails. The Credit River flows through this urban sanctuary. While Streetsville Memorial Park may be the star of the show in the green space department, the neighbourhood is home to a healthy number of parks and playgrounds.

Schools
Some of Mississauga’s best schools are found in Streetsville. Two of the village’s high schools – Streetsville Secondary School and St. Aloysius Gonzagaare – are ranked in the top 15% and the top 3%, respectively, of all Ontario high schools. The neighbourhood also houses four elementary of elementary schools, two of which offer education up to grade eight.

Sports and Recreation
For five decades, the Vic Johnston Community Centre (335 Church Street) has been a local hub for hockey leagues, skating, community events, and meetings. Recently renovated to become a state-of-the-art facility, the community centre is also home to The Hazel McCallion Hall, which hosts a wide assortment of community events and celebrations, from meetings and trade shows to banquets and wedding receptions.

The Arts
Those with a soft spot for the arts will appreciate the Meadowvale Theatre (6315 Meadowvale Road), which has served as a local cultural hub since 1989. The intimate space hosts live theatre, music, and comedy shows in its 395-seat auditorium. The facility also hosts educational workshops.

Business
Rather than business parks found in other parts of Mississauga, like Meadowvale, Streetsville is home to many independently owned companies, like law offices, wellness centres, shops, restaurants, and dentist offices.

Transit and Accessibility
Streetsville is serviced by some of Mississauga’s main roadways. Mississauga Road and Bristol Road retain their original Streetsville names as they pass through the Village (Queen Street and Main Street, respectively). Other main roadways that pass through or near Streetsville include Britannia Road, Creditview Road, Eglinton Avenue, and Erin Mills Parkway. Thanks to the Streetsville Go Station, the hustle and bustle of Toronto is a 41-minute ride away. Streetsville itself is quite contained, with its suburban streets within walking distance of the vibrant downtown.

Lifestyle
Streetsville is home to over 300 shops, restaurants, and bars. Refreshingly, the eclectic mix of businesses feels far from typical chain restaurants and big-box store-filled “suburbia,” and instead features independent restaurants that serve up a variety of global cuisines. The Streetsville Business Improvement Association maintains an ongoing beautification and maintenance of the shopping village district and hosts a variety of year-round events, from local farmers’ markets to Streetsville’s beloved Bread and Honey Festival.

Housing
Streetsville’s large collection of historical homes contributes to its small-town vibe. The homes have been well-maintained through the decades. An assortment of detached homes and townhomes fill the outskirts of the village – many of which have been inspired by their historical counterparts. Many areas of Streetsville are at the higher end of the budget for the average family buyer, especially close to the river. The most premium areas of Streetsville have long broken past the million-dollar mark.

While the historical homes remain a mainstay, many new custom homes have emerged in recent years, especially in Riverview. Some of the largest and upscale homes are located in Riverdale and Creditview, while more modest 50s-style homes and newer remodels are found in Vista Heights. While supply is low due to a low turnover rate (Streetsville is a place where families stay in their homes for decades), there is a large empty nest population who are starting to move out. This opens up space for new families to move into the picture-perfect Mississauga neighbourhood.