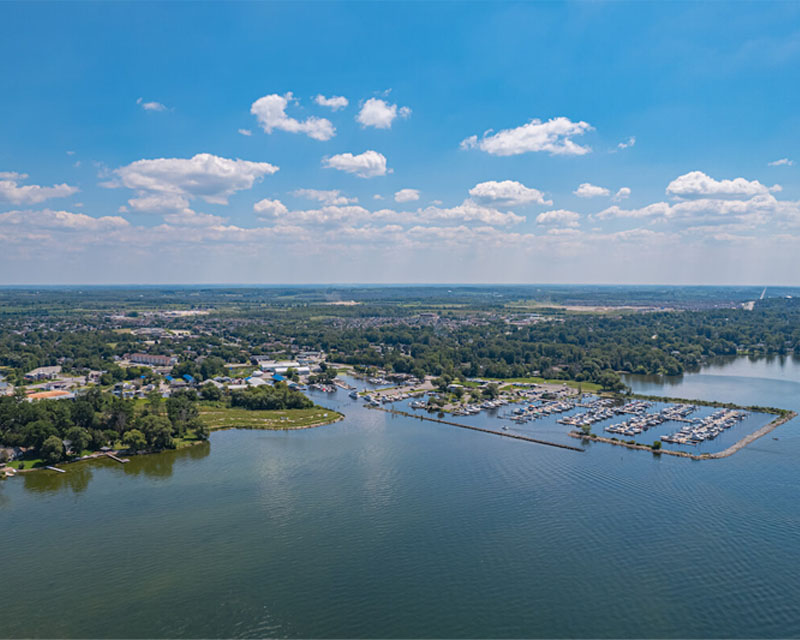 If lakeside living, country vistas and tranquil beaches are your ideas of home, then look no further than Georgina. Located in the Regional Municipality of York, Georgina is a historic and picturesque town in south-central Ontario. This community is a perfect blend of urban and rural life, and its unique landscape has something for everyone.  Idyllically close to Lake Simcoe, it has much to offer visitors and residents alike. With the lake on its most northern border, its neighbourhoods include the sought-after areas of Keswick, Sutton, Jacksons Point, Pefferlaw and Willow Beach. Single detached homes and townhouses are the predominant housing type in Georgina with several new builds nestled in among historic buildings in tree-lined neighbourhoods. New developments in the neighbourhoods of Keswick and Jackson’s Point have gained huge attention. The developments are a mix of high-rise and low-rise together with condo developments and single-family homes.

Until the expansion of neighbourhoods north of the GTA, much of the area was a part of “cottage country”, but major residential developments and the addition of easy access points to major highways, encouraged area growth and Georgina’s population is now around 47000, making it an ideal location for residents wanting a small-town feel, but with access to all the amenities of city life. There are two major highways that run into the Town of Georgina namely Hwy 48 and Hwy 404. Georgina is located at the end of Hwy 404. It only takes about 50 minutes to get to Georgina from downtown Toronto. The closest major airport is Pearson International Airport but there are several smaller airports including Buttonville Airport and Baldwin Airport.

Because Georgina is located on Lake Simcoe, boating enthusiasts flock to this region. There is direct access to the Trent Severn and Georgian Bay Waterways and harbours are available where boats can dock to stay. The town is also serviced by York Region Transit and GO Transit. The addition of access to Highway 404 has encouraged development in the community and additional elementary and secondary schools, parks and green spaces all add to the popularity of this region.

Roches Point, a delightful community within the town, has historic roots stretching back to the War of 1812. After the war, the Roches Point area was in the running to become the new capital city instead of the then capital called York (which is now known as Toronto). This was because it was strategically situated yet far enough removed from the border area with America.

Although it is incorporated as a town, Georgina operates as a township in which its varied communities are all served by a common administrative council. The Town of Georgina has a municipal council consisting of a mayor, and a councillor for each of the five wards. This council represents Georgina at the York Regional Council. Georgina is part of the Federal Riding of York-Simcoe and part of the Provincial Riding of York North.

Firmly committed to preserving the significant natural heritage and environmental features of the area, Georgina is a leader in maintaining sustainable rural and agricultural areas, providing opportunities for residents, and protecting the natural environment. The Georgina community is a forerunner in sustainable agriculture. This area has over 100 farms stretching over 17000 acres. Many of the farms sell directly to the public at farmer’s markets. Here is a list of local agriculture businesses that sell directly to the public in Georgina.

Not only is Georgina favourably located on the largest inland lake in southern Ontario, excluding the Great Lakes, but it is also only a one-hour drive north of Toronto. It is on the northern tip of the Greater Toronto Area (GTA) and has become a year-round favourite destination for outdoor enthusiasts.  Hiking trails, forested areas, rock climbing, and an abundance of fresh lake water means that sports enthusiasts have everything they could possibly want, right in one beautiful and easily accessed location. Although it is designated as a town, it really is known as a community of communities, each worthy of being thoroughly explored. Its proximity to the GTA means it is an easy one-hour commute to most major colleges and universities in the GTA, including the University of Toronto, the University of York and various College campuses.

Home to Sibbald Point Provincial Park, this is a favourite venue throughout the year with large sandy beaches, forested trails, campsites and open grassy areas perfect for picnics. The area boasts a wide variety of wildlife and is famous for its fishing, being regarded as one of Ontario’s top fishing destinations.  Georgina communities offer many events and attractions for every appetite and activity including the Morning Glory Provincial Nature Reserve, Keswick Marsh Fish and Wildlife Reserve and a variety of music and craft festivals.

As one of the loveliest regions in Ontario, Georgina has something for everyone. It just might be the place you’ve been looking for to call your next home.

At Royal LePage Meadowtowne Realty our market-leading team of real estate professionals are dedicated to serving the real estate market across Georgina Ontario. To help you find that perfect home or condo in the Georgina, contact us today and we will put you in-touch with one of our experience REALTORS®.

Interested in receiving more information on Georgina? Let us put you in touch with a REALTOR® that specializes in Georgina.